For the last year, locals and visitors alike watched with interest as a large, modern facility was built on the corner of Main and 1st Streets in Ketchum. Impossible to miss when driving into town, the building rose piece by piece until, over Thanksgiving, it opened its doors for the first time.

The Argyros Performing Arts Center is a 25,000 square foot performing arts complex and community facility that features state-of-the-art technology, innovative design, and one of the finest acoustic systems available in the world. To have a performing arts complex of this caliber in Sun Valley is both exciting and awe-inspiring. We’re still pinching ourselves. Here is everything you need to know about the new Argyros Performing Arts Center.

Named for founding benefactors Julia and George Argyros, the Argyros Performing Arts Center is an evolution of the nexStage, a theater that served the community on the same site from 2001 to 2017. According to Sun Valley Performing Arts, the non-profit organization who manages the Argyros, as the community grew so did the opportunity and need for a performing arts complex that would gracefully serve both world-class performances and local events.

With community support, as well as a focused fundraising effort to raise the $14.5 million needed to build the facility, the Argyros broke ground in July 2017 and opened to the public in November 2018. 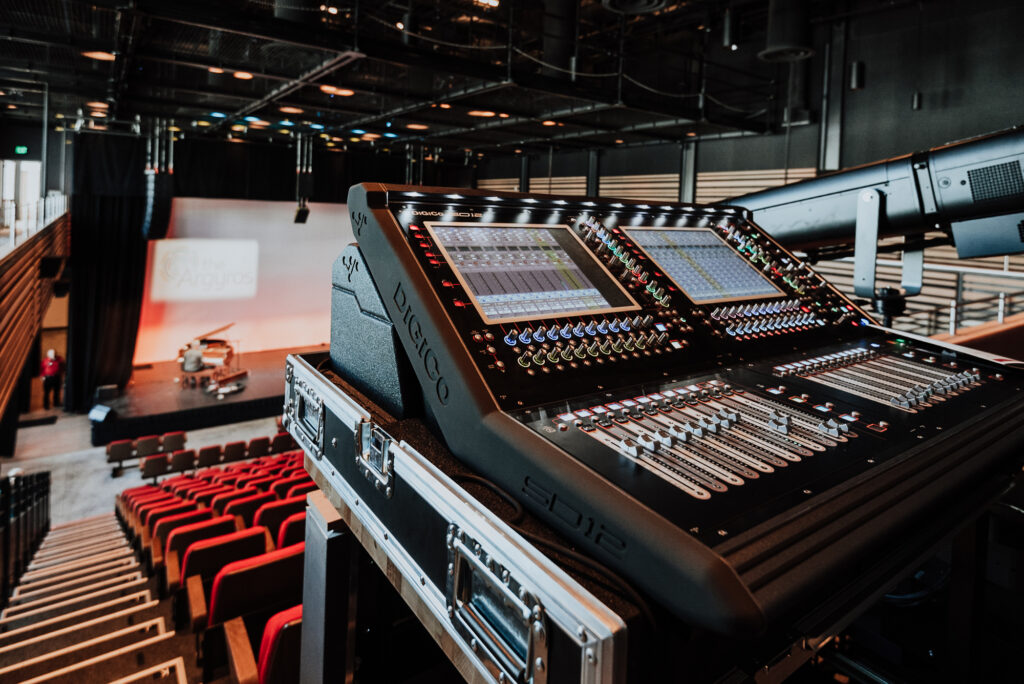 Facilities at the Argyros

The Argyros is more than a theater (although the theater is pretty spectacular!). The facilities speak to world-class performers and discerning audiences, but also to serving the Sun Valley community. Many of the facilities in the Argyros are available to rent for both public and private events.

The Elizabeth and Thomas Tierney Theater is a 462-seat theater with retractable seating from Belgium, which allows multiple different setups to be affected in the same space (from theater-style seating to cabaret). It features a tension grid lighting system, floor to ceiling windows with mountain views (with shades to block the light during performances), and a Meyer Constellation Sound System. The Meyer Constellation Sound system is one of the most advanced acoustic setups in the world, and the Argyros is one of the first installations of the system in the western United States.

The Bailey Family Studio, located on the second floor of the Argyros, is perfect for smaller performances, meet and greets, and social events. The studio can seat 49 people and has a jaw-dropping view of the ski slopes and downtown Ketchum.

The Dennis and Phyllis Washington Café, paired with a large outdoor plaza, offers a gathering place for the community to grab a cup of coffee or a glass of wine and talk, watch informal performances, or enjoy an event. The fire pit on the plaza is a particularly cozy place to enjoy a frosty winter afternoon.

Behind the scenes, the facility is no less impressive. A green room, star dressing rooms, and group dressing rooms provide comfortable amenities for performers, while a professional kitchen serves as a home base for caterers servicing events. The Argyros’ rare Steinway Model C piano is housed in a piano garage behind the stage, ready to be wheeled out as needed. A sprung floor in the Tierney Theater —the first permanent installation of a sprung floor in a performance space in Sun Valley—opens the door to a new caliber of dance performances.

Performances at the Argyros

The cultural, artistic, and social opportunities in Sun Valley have always been outsized. With the opening of the Argyros, whose mission is to “enthrall audiences and inspire performers” in their state-of-the-art, world-class facility, we are excited to see what the future will bring.