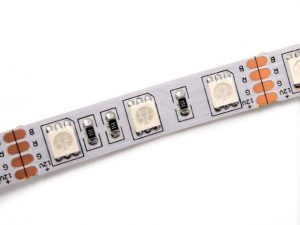 connectors on a RGB strip; these are positive voltage, Red, Green, Blue (Image 1.1) (White if RGBW). With a non-addressable strip you can simply turn on and off each color on the strip as a whole, with a proper LED dimmer inline you can even get a full RGB or RGBW color spectrum, more on this later. For most accent lighting purposes this is more than sufficient for back lighting a display, cabinet lighting, display cases, and so on. The contrast in an addressable strip is that in addition to being able to change the color of the whole strip you can now also change the color of each individual LED separately from the rest of the strip. This means that you can create patterns and chases within the strip. The question is how do you do this? To start you will notice in image 1.2 that there are only 3 conductors, positive, negative and data in. You have two options, you can purchase a LED controller which can give you some fantastic preset functions or for the more advanced user you can purchase a microprocessor such as an Arduino or a Raspberry Pi and program the functions yourself. The affects you can create with an addressable LED strip are limited only by your imagination. When connecting multiple strips together you can even create video affects by practically making your own video wall.

A RGB strip also known as a 3:1 is simply a combination of Red, Green and Blue LEDs per pixel. Each color can be 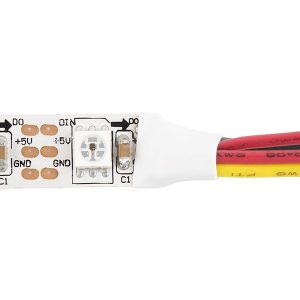 adjusted by 255 points 0 being off and 255 being fully on. This means that 255 x 255 x 255 yields 16, 581,375 different color variations. Adding in the W for white you now have a RGBW strip which makes 255 x 255 x 255 x 255 yielding 4,228,250,625. Will you ever need that many different colors especially since adjusting one color one digit is barely perceivable to the human eye? Probably not, however the RGBW or 4:1 strip does lead way to a much clearer range of pastel colors than a RGB strip can produce. Take a look at the comparison of the two different color ranges in the charts below to see how a RGB spectrum differs from a RGBW spectrum. It is important to note that RGB and RGBW are not the only two options in regard to color. You can also get single color strips which for a lot of backlighting purposes would be sufficient. 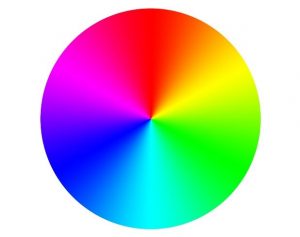 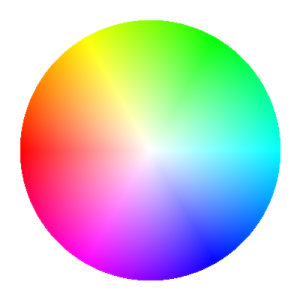 When you begin your search for an LED strip you will notice a four digit number next to “SMD” (surface-mount device). The four digit number is the size of the LED in mm. The first 2 numbers are the height followed by the width. See table 3.1 for a list of all the SMD LED types. The most common being 5050SMD, 3528SMD, 3020SMD, 5630SMD LED modules. Referencing image 3.1 you can see the physical SMD LED and the size measurements.  The final consideration is the pixel density or more commonly referred to as the pixel pitch. As you can see in image 3.2 there are 3 main densities to consider. 30, 60 and 144. It is imperative to take into account the power requirements when looking into the 60 or 144 strips. The effects will be significantly brighter and the chases will be smoother, however the power requirements for some of these strips is rather significant. A RGB 5050SMD 144 strip can draw ~7 Amps @ 5V per meter! In summary the larger the SMD LED the brighter the output and the higher the power requirements.

When trying to find the right solution for your specific project you should be able to recognize the difference in an addressable strip and the non-addressable via the chip just before each LED pixel. You should already know if you want RGB or RGBW prior to begin your search. Finally, you should also be able to pick a reasonable LED size depending on your needed light output. To add an additional point, using a diffuser or a diffuser tube will allow you to get a clean smoother light output and disguise the LEDs themselves. 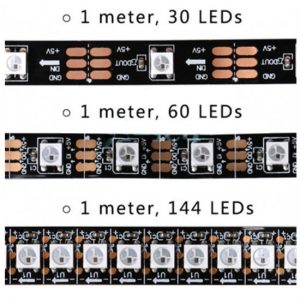 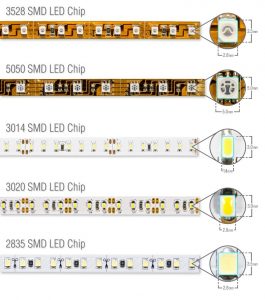 The City of Maricopa Police Department