Intellectual property (IP) is a significant factor in determining business success and helps separate companies from one another in the market. Your IP could be a client list, product schematics, go-to-market strategy, or software code – it doesn’t really matter. What matters is that you protect it, albeit in a reasonable way so that customers can still use your product (and enjoy doing so).

Movies are Hollywood studios’ IP. These studios spend a considerable amount of money creating and marketing movies, and they’ve taken steps to prevent users from pirating their content. Their latest approach is High-bandwidth Digital Content Protection (HDCP). HDCP is a system intended to stop encrypted content from being played on unauthorized devices, or devices that have been modified to record HDCP content.

Copy protection isn’t inherently evil, but the user-friendliness of copy protection schemes varies tremendously. This contributes to an ongoing challenge in Pro AV – equipment interoperability. Regardless of the underlying technologies, there are a multitude of ways a system can fail to perform as expected – from network design to transmission protocols to firmware versioning. For instance, there are multiple opportunities for the HDCP “handshake” to fail in systems where consumer sources and displays are used for commercial AV deployments. “Handshake” refers to authentication, encryption, and revocation. In some products, HDCP is not deployed correctly, primarily due to manufacturers applying the rules incorrectly (or not following them at all).

The legacy version, 1.x, is still present in the market on a huge number of devices. It is mostly interoperable with 2.x devices, which simply convert 1.x to 2.x when they pass content through. However, “type 1” content (i.e. 4K theatrical releases) may not be delivered to any device that is not fully HDCP 2.2 compliant.

Now let’s look at another difference: max devices. Device count includes the source(s), displays, and network adaptation devices. HDCP 1.x supports 128 devices; HDCP 2.2 only supports up to 32. Now this is where it apparently gets complicated for some vendors of allegedly HDCP 2.2-compliant network video equipment. Vendors of network video distribution systems that claim to support more than the 32 allowed devices are either not aware of, or are being misleading about, the capability of their products. They may be breaking the rules unwittingly, or knowingly so and assuming that compliance will not be monitored or enforced in Pro AV applications. The bottom line is caveat emptor: buyer beware. 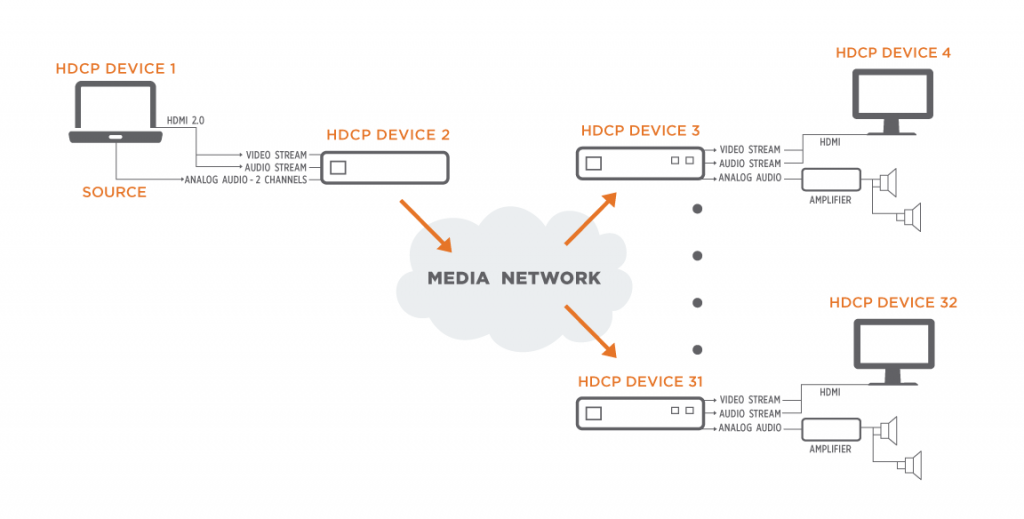 HDCP 2.2 Pro will indeed be a robust way to implement HDCP on commercial AV networks. It has no restrictions on the number of devices or on device “depth” (max levels). It will support wired and wireless networks, and even better, it eliminates some of the constraining factors of other versions of HDCP. However, HDCP Pro has a few specialized requirements. Vendors will need to build separate HDCP Pro repeaters, which are labeled as such. They will only be able to sell them to authorized installers (who will have become so by entering into a legal agreement with DCP), and those installers must only install them in projects that fit the criteria of the HDCP Pro White List.

Each Pro repeater contains an internal system renewability message (SRM) engine of its own, which can verify the authorization status of every device connected below it. In practice, that means the repeater acts as a proxy when reporting up to the media source it’s connected to; the repeater will transmit “I’m a device count of 1, with a level count of 1,” regardless of how many devices are in the signal path below it. This is the essence of how HDCP 2.2 Professional removes the topology limits of prior specifications.

DCP – the governing body for the HDCP specifications – updates the SRM four times a year, and it’s a condition of the HDCP 2.2 Pro license that the SRMs in professional repeaters be updated at least once each quarter. To clarify any potential misunderstandings regarding SRM updates, if the update does not take place and the system detects an SRM that is more than three months old, the repeater’s functionality changes to “regular” HDCP 2.2 – reinstating the topology limits of four levels and 32 total devices until a proper up-to-date SRM is provided. If a Pro repeater has internet access, the SRM can be updated by accessing a URL maintained by the DCP and downloading the latest version.

HDCP 2.2 Pro was recently published as an official standard. However, until it arrives in products, network video vendors are bound by the specifications outlined by HDCP 2.2 – 32 devices only. Definitely not 128, or “an unlimited number,” or even “yes.” Anything greater than 32 is breaking the rules, whether they know it or not. Integrators should know and understand that.

HDCP 2.2 Pro requires a little more work from installers – both in terms of paperwork and managing SRM updates – in exchange for the benefits of unlimited fan-out, but that’s better than being denied access to content in large deployments. It’s not something you should ignore, especially considering that HDCP specifications will continue to evolve.